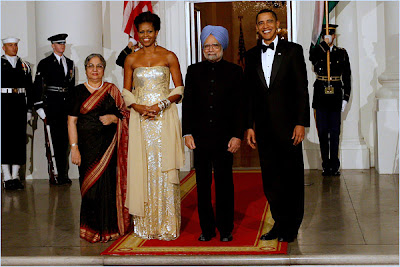 WASHINGTON — It is an old tradition, a White House dinner governed by ritual and protocol that happens to be this city’s hottest social event. But at their first state dinner on Tuesday night, President Obama and his wife, Michelle, made sure to infuse the glittering gala with distinctive touches.

They hired a new florist, Laura Dowling, who bedecked the tented outdoor dining room with locally grown, sustainably harvested magnolia branches and ivy. They selected a guest chef, Marcus Samuelsson of Aquavit in New York, an American citizen who was born in Ethiopia, reared in Sweden and cooks up melting pots of flavors and cuisines.

They invited local students to witness the arrival of the guests of honor, Prime Minister Manmohan Singh of India and his wife, Gursharan Kaur, and presented a mélange of musical entertainment, including the National Symphony Orchestra; Jennifer Hudson, the singer and actress; Kurt Elling, the jazz musician from Chicago; and A. R. Rahman, the Indian composer who wrote the score to the movie “Slumdog Millionaire.”

And at the tables, the meatless menu included a mix of Indian and American favorites, including some African-American standards. Collard greens and curried prawns, chickpeas and okra, nan and cornbread were served to the 320 guests — including some well-known Republicans and prominent Indian-Americans — who started off with arugula from the White House garden and finished up with pumpkin pie tart. (After a tasting at the White House on Sunday, the Obamas gave the dishes their stamp of approval, Mr. Samuelsson said.)

And don’t forget the dinner plates. For an administration that publicly prizes bipartisanship, what could be finer than an eclectic mix of Clinton and Bush china?

The Obamas promptly distinguished themselves from their immediate predecessors by holding their dinner under a grand tent on the South Lawn to allow for a more expansive guest list. And they emphasized some of their favorite themes, including bipartisanship, diversity and a focus on healthy meals.

Mrs. Obama made a splash by showcasing deep, rich colors — apple green for the tablecloths and varying shades of plum, purple and fuchsia in the hydrangea, roses and sweet peas in the centerpieces. 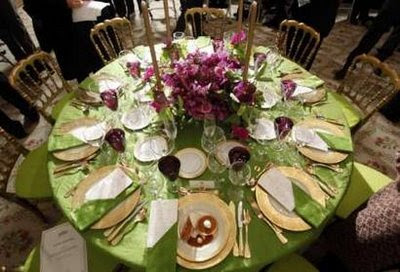 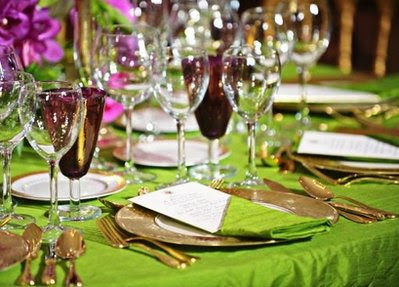 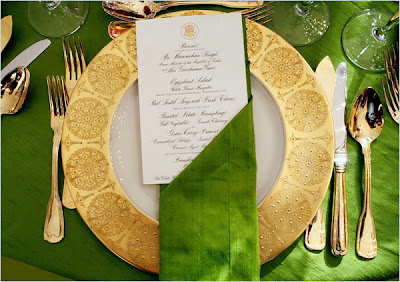 There was White House honey and sage from the garden and a menu that gave vegetables and beans — including eggplants and lentils — top billing. (For a White House keen on promoting fresh fruits and vegetables, what could be more serendipitous than a guest of honor who happens to be a vegetarian?) And the Obamas shook things up by serving, among other dishes, Indian food to an Indian delegation, typically a no-no. 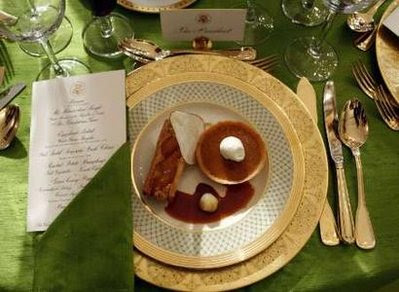 “You wouldn’t try to outdo the Indians; that would not be typical,” said Anita McBride, who served as Laura Bush’s chief of staff and took pains to praise Mrs. Obama as moving in a new direction. “It’s the perfect combination of American food with a nod to the visiting country.”

As for the dozens of schoolchildren invited to participate in the day’s events, many savored the chance to see the White House up close. One group of young women spent time with Mrs. Obama in the State Dining Room and learned about the history of American state dinners and sampled some pumpkin pie.

“These events probably seem like they’re miles and miles away, like they’re just untouchable,” said Mrs. Obama to the young women, some wearing sneakers and short sleeves.

She said she hoped this would inspire them to think harder about their place in the world around them.

“Who knows, maybe one of you all sitting at this table, one of our little mentees, will be living and studying somewhere in India — maybe New Delhi or Mumbai or Bangalore,” the first lady said. “Just imagine that. Start thinking about your future in that way. This visit at this table is the beginning of that for all of you.”

Posted by Simply Natural Events at 9:25 PM No comments: Links to this post 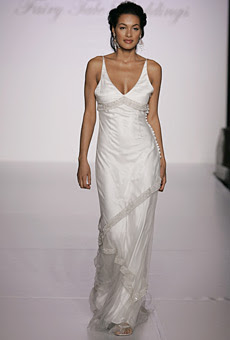 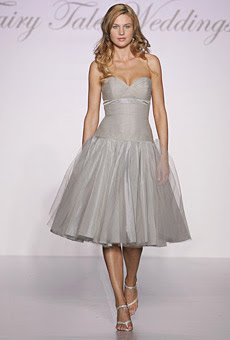 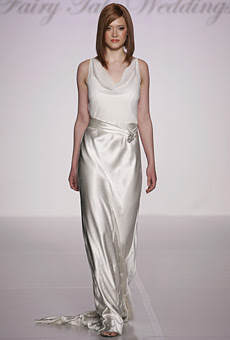 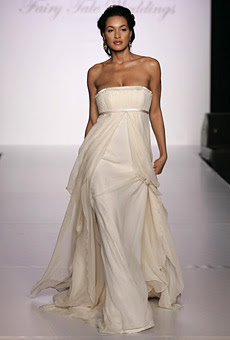 Kirstie Kelly is having a sample sale at her LA flagship! For the budget-savvy shoppers with shall we say, amazing taste...

What: Bridal Gowns starting at $400

Bridesmaids, cocktail and flowergirl starting at $100

How: Call for Appointment or just stop by

Posted by Simply Natural Events at 9:22 PM No comments: Links to this post 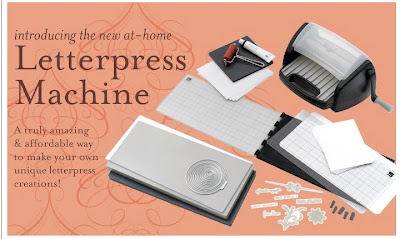 How great is this new affordable letterpress machine from Paper Source? It includes everything you need to create cards and crafts!
where to purchase: Paper Source $149.99
Posted by Simply Natural Events at 1:15 AM No comments: Links to this post

Amy Atlas create a fall-inspired dessert bar with faux-bois and acorns, just in time for Thanksgiving.

To get the recipe for pistachio cinnamon meringue check out her blog! 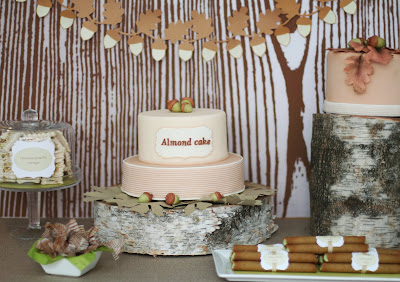 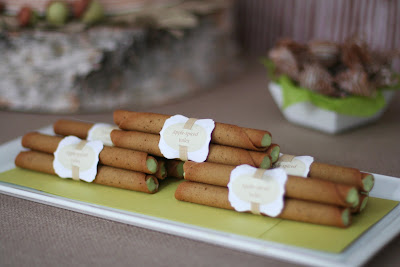 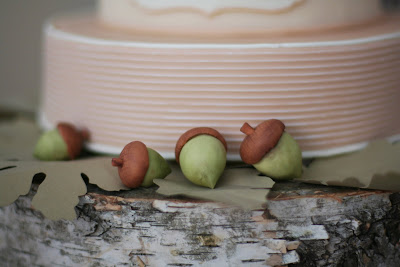 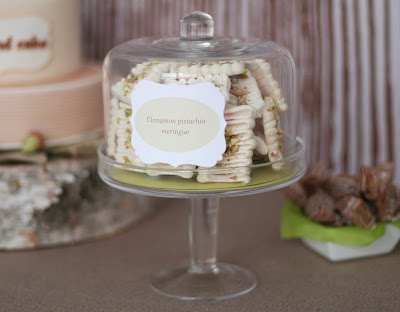 Favors By Serendipity is offering a $200.00 Shopping Spree towards anything on their site – including Cake Jewelry, Bridesmaids Gifts, Bridal Shower Favors, Wedding and Party Favors, Candy Buffet Packaging and more…..just for giving your opinion.

With Winter approaching, they want to know if you will be using winter theme favors or what your favorite favor is and would love to win. Visit Favors By Serendipity and then post a comment at yourweddingwhisperer.com and be entered into the drawing. 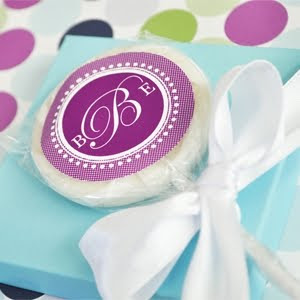 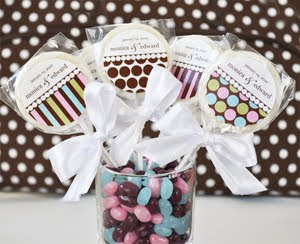 Posted by Simply Natural Events at 11:45 PM No comments: Links to this post

I spent a lovely few days in Manhattan! Perfect weather, great food, spectacular shopping!
I was lucky enough to visit Ceci New York. Each letterpress piece was exquisite, unique, and defined elegant. Thank you to Brooke, who took such great care of my bride! 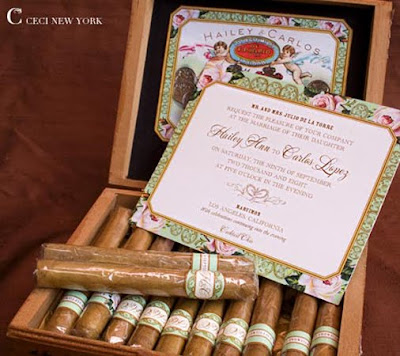 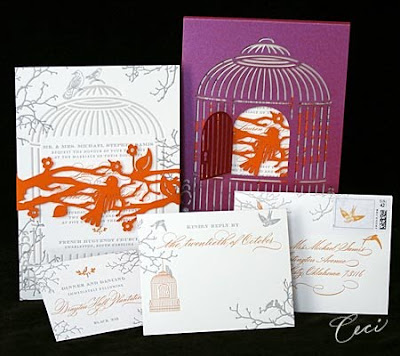 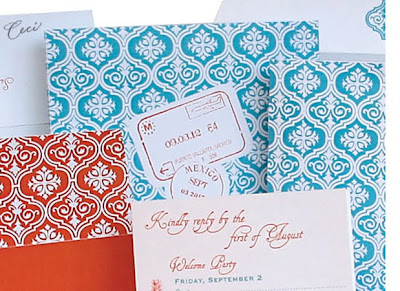 Posted by Simply Natural Events at 11:56 PM No comments: Links to this post

Getting to Know Us